I am the co-owner of Tall Audio, a bespoke audio company, along with my business partner Paul Stadden. We set the company up over ten years ago now and have worked with a wide range of production companies, including BT Sport and C4.

This year has been one of multiple professional challenges, which is hardly unique to us, of course. The UK TV production sector had to overcome many hurdles during the first lockdown earlier this year and we were very heavily involved in multiple projects. Some of those challenges still exist today.

The flagship project that we finished right at the end of this overall remote working scenario was Gareth Malone’s The Choir (BBC), partnering with Timeline Television, and we worked on it for two months. The idea behind this series, taking COVID into full account, was to create “a choir out of all of us”, each week “helping people find their voice”. The three-part series featured key workers coming together – virtually – to sing a song they had written, reflecting the way they were feeling and how the pandemic affected them.

This was quite bonkers. It was pre-recorded. As with other work at the time, I was in my garage with a Calrec Brio and a Dante (AoIP) network. There were 12 households taking part, all on iPhone and with a toolkit of audio recording devices including a shotgun mic and a radio mic. 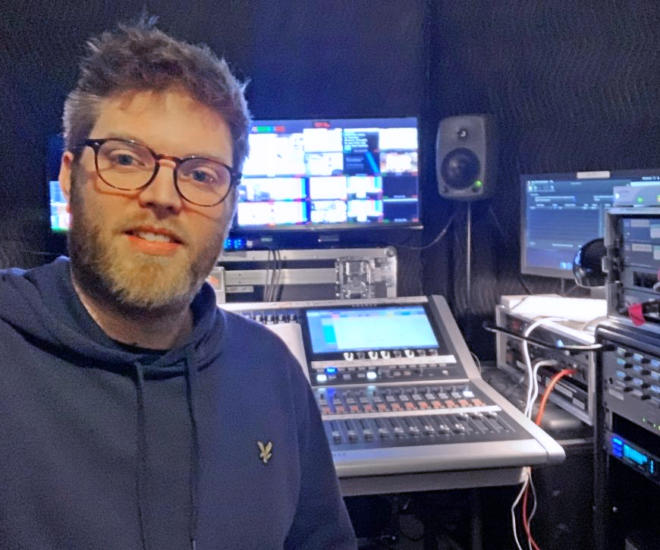 There were two main elements to the show. The first was a “documentary” element. So, simultaneously, while we were working with Gareth, there were Producer Directors teaching participants how to shoot. We had a guy called Alec who was acting as Sound Guarantee who helped set up the audio. They were making what was, in essence, a documentary within the programme.

We could have up to 12 people working at once in these different crews and they could switch between houses. It was incredibly challenging – the iPhone 11 has a very good camera but the audio was really tricky. To get audio, we had to wrap some technology in tin foil because of 4G interference, issues like that.

Also, because of the way the show is structured, people are singing and then talking. There were no real proper audio settings for them so we really had to work with those Producer Directors to achieve the best quality audio. There was some sterling work by people in post-production, too.

That was the “documentary” side. That audio was coming into me and we were then using a lot of Cedar noise reduction. We had to make a call with what was going to be acceptable in regard to that. We had to treat the audio as it came in, which is not something that we would normally do. We had to make a decision there and then whether it was acceptable.

The second side was the music element. We rigged Gareth’s house up and he used a couple of Mobile Viewpoint cellular bonding backpacks. We had three cameras in his studio. He had a proper radio mic (DPA) and I had a feed from his Pro Tools system – a stereo feed of all of his music. He would then chat to the key workers taking part and then they would sing and compose songs with him. Gareth would play a bit on the piano and then they would sing a little and it was like a kind of question and answer session.

Find out more about Calrec Brio

Then he would then send me a file of a couple of bars of the song and then I would time it using a Sync It box (video/audio syncing with an XLR in and out). That sent a sync pulse out and they would then receive that pulse on their talkback phone app. They would hold their phone up to the microphone and then that sync pulse would come back to me and it would give me a reading of the delay (like an internet ping time). I would then delay the backing track per location. So, you might have 12 different people all with different delay times: there was a delay time per-location. This was the same issue with the live work we did with BT Sport during the first lockdown.

Then I would play a test track, they would sing back to me and we would test it. The Calrec Brio was amazing with the routing and the delays. I would be in a situation where I’d be talking to Gareth, he would say, right, I’m going to send you a track. I would then route his ears away really quickly using the contribution; then I would route the music to the singer so they could hear it. If I had other desks from other manufacturers, I would have been stuffed.

I would play the track and they would sing back then that moved on to having lots of people singing together. The singers couldn’t hear each other but Gareth could hear them in time. We would create custom backing tracks so we’d have say, eight different backing tracks and Gareth would put a different person’s parts on each of them. 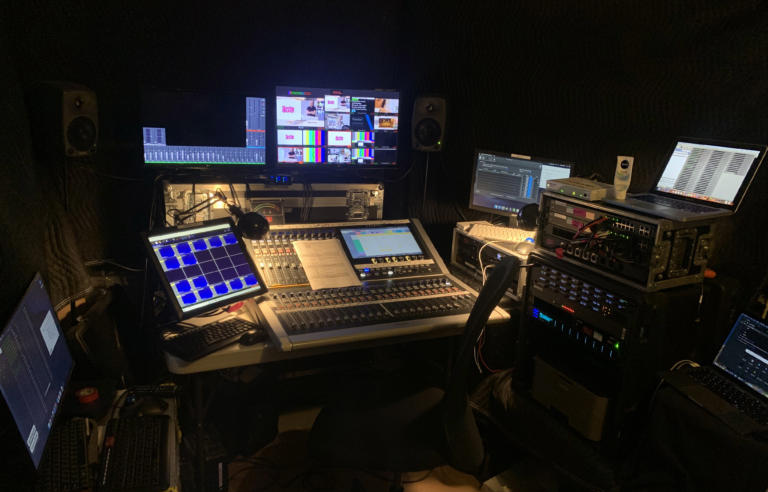 After every session we recorded, I multi-tracked it but also recorded it into Pro Tools. I would comp up all the audio, send it to him so the next time they did a rehearsal he would be able to use their audio so people could hear what others were singing. It was bonkers.

The internet slips. You’d do a take, someone would have slipped so I’d have to re-sync and do it again. There were some amazing moments doing this. It was a proper challenge. Only for the final performances could we send out a sound recordist. It was a real achievement for all involved.

Click on the links below:
Standing tall and being heard: A case study with Tall Audio
South Korea’s JTV installs Brio for radio programming
Russian HD  upgrade with Brio