Thank you to Chuck Ibey, A1 & Sound Guarantor from Dome Productions in Canada for sharing this insightful blog on what it’s like to work in the NHL Bubble.

Chuck, who has been sharing mixing duties on a Calrec Artemis audio console since 24th July 2020, has written this very current and relevant back to work account that provides a window into the world of audio inside the NHL Bubble.

With the NHL returning to North America, we had a very unique sound situation to deal with. Obviously we’d be returning with no crowd in the arena, and new guidelines in place to restrict the spread of COVID-19. The NHL has done an amazing job of sheltering it’s players, staff, officials, broadcast crews, and service industry workers inside a secure bubble. We’re all tested daily for COVID-19, plus undergo a screening questionnaire and temperature check before entering the venue and hotels. We’re committed to staying inside the NHL bubble until the end of the Playoff series, which could go until early October. It’s an adjustment, being confined to a small area including your hotel and the hockey rink, but we’re all excited to be back doing what we love.

Our audio crew is from across Canada and includes Patrick Castonguay and myself sharing the broadcast mix duties in Edmonton, Alberta, Canada. Benito Altobelli is with us as relief and backup A1 in the (hopefully) unlikely case of someone getting sick. Jeff Kozak is in charge of the Synthetic Crowd mix, and we have 2 of the best A2s in North America, Mike Cleasby and Steve Hilder.

This event is very much like how a “world feed” would be done for an event like the Olympics. We have 2 broadcast trucks from Dome Productions handling the production of the game, with national and regional broadcasters taking our packaged audio/video feed of the games and adding their own commentators, graphics, and other content down the line. Inside our truck, we deal with the sounds of the game only and do not have to worry about announcers like a traditional broadcast. The other thing we don’t have to deal with is a crowd. Obviously, because of the current pandemic, the arena is empty. An arena that can typically hold over 18,000 cheering fans.

The NHL’s solution to this was to produce a synthetic crowd layer that can react to the game in real-time. Using a library of recorded crowd beds and sounds from EA Sports, Jeff Kozak is “playing” the crowd in real-time during the game with an Ableton Live setup and midi trigger. Someone’s on a break-away scoring chance, you’ll hear the anticipation of the crowd as he skates toward the goal. The home team scores a comeback goal, you’ll hear the building go crazy with team-specific goal horns and fans cheering. Once we had everything dialed in with the mix, you could close your eyes and it sounded like any other playoff hockey game.

We quickly found that having an empty arena provided a lot of acoustic issues. We are mixing these games in 5.1 surround sound and placed a number of ambient microphones throughout the arena to capture the live sound of the building. The PA is still playing inside the arena, and we wanted to ensure we captured the live ambience of that and the players. Unfortunately because of the empty seats, we heard a lot of echo and slap delay as the sound hit all of our microphones at different times. It’s something that wasn’t noticeable during typical hockey games. Our solution was to time-align all of our microphones and the feed we take of the PA. Dialing in delay from 1 or 2 frames all the way up to 17 frames or so, we managed to get the whole building to sound in sync. Another unusual aspect of the mix was the inclusion of the PA feed into the mix full-time. In a typical hockey game, we’ll mix in the PA feed during anthems and referee calls, but never during the game itself. It’s just too much sound, and the PA is typically cranked to 11 inside the building, so it’s all we ever hear in our microphones. During this event however, the PA is being played much quieter, and we felt a lot of energy and presence missing in the mix. That formed the NHL’s decision to include some of the PA feed directly into our broadcast mix.

The Calrec Artemis console we are using quickly showed it’s usefulness during this event. We have somewhere around 65 channels of transmission audio, spread over 24 different transmission paths, going all over North America to many different national and regional broadcasters. We have our primary 5.1 mix, plus a number of other 5.1 or stereo mixes and stems available for broadcasters to choose from. Having such a large need for flexible and adaptable routing was exactly what the Calrec was made for. The ability to create such a high number of outputs and different mixes was a must-have for this, and we needed to work with multiple layers. Having 3 different A1’s mixing these games, with a very short turn-around in between games meant there was no time for re-configuring or reloading of the console. With the use of cloned faders, paired faders, and multiple layers, we’re able to each have our own operating layer organized the way we like it. We have our own presets saved for compression/EQ/automixing, and can quickly load those as the next A1 sits down to mix his/her game. Sound is a very expressive and subjective medium, and we didn’t want to shoehorn any of us into working a certain way.

Find out more about our Artemis console 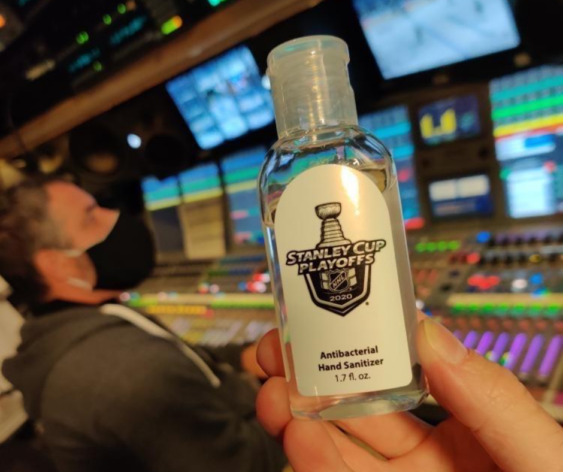 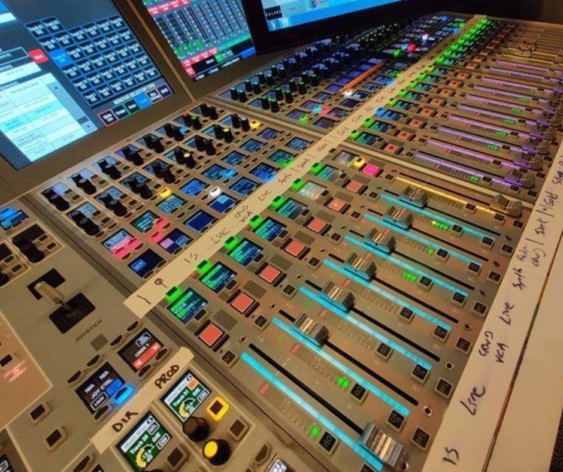 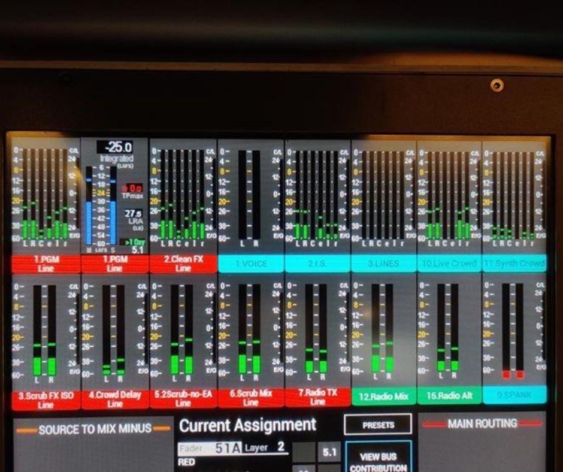 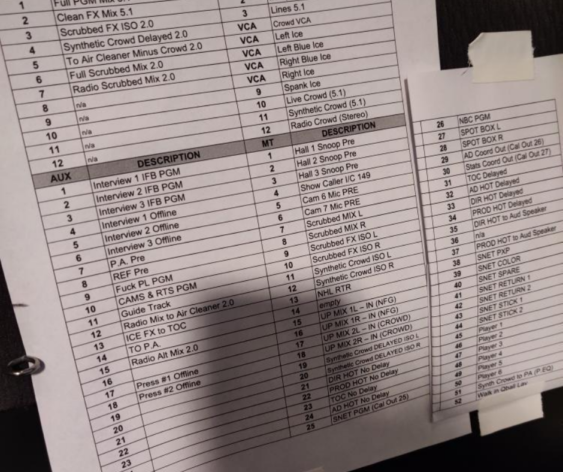 Our microphone compliment in the arena includes 2 stereo ambient pairs in the rafters. One pair hanging in the score clock, and another pair hanging in our traditional press box position. We have shotgun mics hanging from the grid at each end of the ice, positioned right over the slot, or the area in front of the goal. The typical 10 count of Crown PCC boundary mics are placed around the glass to pick up the skates, shouts, and stick sounds, while we also included 4 contact mics mounted on the outside of the boards in the corners to accentuate the LFE channel when we have big hits in the corners. There are lavaliere microphones mounted in key positions in walk-out areas, and hallways to capture behind the scenes sounds, and we have microphones on our hand-held cameras. These are all triggered via GPI, and can open and close based on the specific camera that is on-air at the time. The synthetic crowd feed is stereo, and we’re using an upmixer to spread this out to a 5.1 image.

Player interviews are something that had to drastically change in this current pandemic environment. There’s no way we could have a reporter standing right beside a player, shouting questions into his ear, while passing a microphone back and forth. The solution we used included a shotgun microphone, a speaker, and separate rooms. The interviewer is in a room by themselves on the opposite side of the rink, with a microphone and a speaker in front of them. There’s a robotic camera and remote-controlled TV lights. There are 2 interview rooms with the same setup elsewhere in the rink where players can simply walk in, and stand on a mark on the ground. They see the interviewer on a TV screen in front of them and hear the questions come out of the speaker. They answer, and walk away. Such a simple and effective way of asking questions in a physically distanced situation. The interesting trick we had to find though is dealing with the feedback or bleed we sometimes get when hearing questions and answers coming out of speakers with live microphones. Using a combination of automixing, gating, expanding, and compression linking, we were able to duck each microphone as the other source was talking.

Getting Back to Work Safely

Setting up and working playoff hockey during a pandemic is a challenging situation. The NHL, Dome Productions, and many other organizations took their time to establish safe protocols and standards to ensure the least possible risk for everyone involved. We’re all wearing masks for the entire day, and using hand sanitizer at every opportunity. Headsets and other personal equipment is sanitized and bagged before use, and any time equipment is handled or installed, it gets a thorough sanitizing wipe down. The Calrec Artemis has never looked cleaner! We’re practicing physical distancing during work and when we’re done for the day. It can be challenging, especially when you want to high-five a colleague after a successful game, but we all understand the situation the world is in. Thankfully, it’s a world where we can watch playoff hockey again! Enjoy the games, and stay safe!

Missed our Craft Profile with A1 & Sound Guarantor, Chuck Ibey?