Tall Audio, which has been around now for 10 years, is owned by Alex Wrigglesworth and Paul Stadden. During the first UK lockdown they worked on multiple projects using new, and innovative remote working techniques and some existing remote production skills to overcome what were very challenging production scenarios. When we say “challenging”, we really mean it.

Before we take a look at some of the work they did during the UK full lockdown and for the weeks after, here’s a little history. Stadden explains, “We are two Sound Supervisors that have worked across a variety of formats, including documentaries and film work as well as OBs and studio television. We met on a drama and set up Tall Audio about 10 years ago, and we’ve really expanded, not least into large, multi-camera OB work.”

Tall Audio provides complete solutions. Clients often come to them to take advantage of their end-to-end approach, hiring all the specialists needed including the planning, liaising with other companies as required and taking advantage of their large amount of equipment. Stadden adds, “Because we can cross over into documentaries and ENG work, we can also provide the ENG filming. We look after the whole audio production, not always, but very often.” 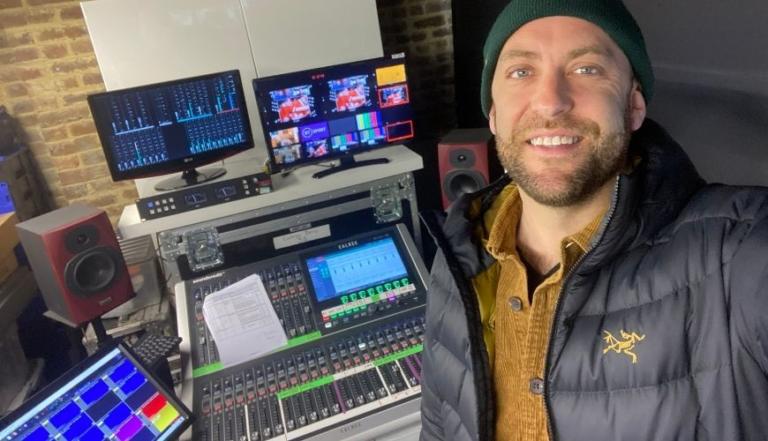 Covering motorcycling, specifically the F1-equivalent MotoGP, first for the BBC and for many years now with BT Sport, has been a mainstay of their business. They also work on the Martin Lewis Money Show Live on ITV with Stadden also having worked on Blue Planet Live and Planet Earth Live. They handled Alaska Live, too. Wrigglesworth says, “We also worked on the Alternative Elections for C4 before Xmas and that was the first outing for the Calrec Brio console. We mixed all the outside sources with the Brio using Dante (AoIP). That was amazing. It worked very well. We also provided kit and crew.”

But then came COVID and as for so many, the impact was swift and extremely tough to take in. Wrigglesworth says, “I was doing a job for an advertising and marketing publication on a ‘digital festival’. It was the last job as COVID became a reality. We’d set up a de-rig studio at their location and then people joined in via the internet, rather than in the studio. That was the last week before lockdown. And we thought, hang on a minute…”

In a twist of fate, it turned out to be advantageous that the MotoGP season was very quickly postponed, allowing Tall Audio to tackle the overall situation head-on. Stadden says, “That’s when we spoke to Timeline Television. A Director friend of ours told us about this technology they were going to use for parts of the Olympics (Timeline’s Stream Anywhere app) which became invaluable. We started chatting to Timeline and within a few days I had a talkback panel and a Unity Connect, which is public internet transport technology we’ve been using, to see if it worked over public internet for us. Timeline played a massive part in this. They are very experienced in remote production and this helped hugely when it came to remote working. Within a week or so, we handled a corporate internal job for BT Sport. Then quickly after that we pre-recorded a football show and then on the Sunday a live Moto GP show! After that it exploded.”

Stadden and Wrigglesworth were based in their respective houses – well, garages – both with a Calrec Brio and an AoIP Dante network.

When working with Timeline on BT Sport lockdown projects, they are all embedded feeds that come in, whether that be from an iPhone or Mobile Viewpoint hardware unit, a satellite feed or from an EVS system. These were then put onto a Dante network and sent across to Tall Audio via Unity, which can have up to 64 mono channels of audio. But over public internet it did vary, and they had to play around with buffer times and latency.

Find out more about Calrec Brio

Projects (see box) were done both live and as-live. It was Stadden who worked mainly on the sports work that came in. He says, “Most of what we did was live. We had two mixers running, one as redundancy. This is a case of two people mixing simultaneously in case of an issue so any changeover would be seamless.

“I did the main mix using a Brio, which proved invaluable. Both Alex and I had a Brio for our work and, to be honest, they completely saved the day. It was a huge amount of work and complexity coming our way and the Brios simply handled everything that we threw at them. And using Dante was amazing.”

Tall Audio needed consoles that fitted the very limited amount of space that they had but that also gave them the edge in terms of broadcast quality and functionality. Stadden adds, “The routing capabilities of the Brio along with the “bird beater” control (being able to open a fader that automatically mutes another send) were invaluable. Without these, it’s impossible to work as quickly and concisely as we needed to. You are getting the power of a much larger desk in a small footprint. We also had good internet with low jitter (low irregular packet delay) and that was also crucial.

“I did all the Bundesliga live presentation matches from my garage. That is how robust it was.”

The embedded feeds would come in from BT Sport in Stratford, London, via Timeline in Ealing and then Stadden would have two commentators from home using Glensound Paradiso commentator units over IP (using Comrex for this). The audio was then de-embedded in Ealing and then via Dante audio, through a frame sync, to him. There was also a pitch side reporter at some games when they did Premier League matches. All of that went through the Brio in his garage. The commentators could also hear the studio via the Brio.

Stadden says, “We streamed out onto the Unity but we also went via a Comrex interface as well, which is an IP codec. Our master output tended to go via the Comrex because it was a little bit more stable than the Unity. Also, because it was about delays in terms of comms, we wanted to be able to get the audio back as soon as possible. So the Comrex was primary, the Unity secondary. There’s an app called Unity Intercomm, which is a talkback app. So remote presenters would listen to the talkback app but also have a mic plugged into it.”

Timeline’s Sound Guarantees had to work extremely hard, routing all the video and comms audio from their homes. The routing matrix on a Calrec Apollo desk in Ealing was accessed remotely to route all the EVS feeds onto Dante lines to get back into Unity. The audio was remotely de-embedded and routed completely remotely, similarly with the intercom feeds.

The football – Bundesliga and some Premier League – was very complex to work on because Tall Audio had to create three different mixes: a clean commentary, an effects mix and one with post-match interviews. The Timeline TV Sound Guarantees in Ealing would time the Dante and the Comrex output so that everything was in sync. This was a real challenge with live football. Stadden’s multiviewer was receiving feeds via the internet and that was how that was distributed to all the directors, EVS operators and the rest of those working at home. Stadden adds, “Of course you can’t check sync on that so there was someone quite talented sat in Timeline’s Ealing facility getting that lip-synced. That’s fine with pre-recorded content but live? There were some long mornings of testing.

“The underlying thing is that with the Calrec Brios, we had consoles that did absolutely everything we asked of them. They have been used pretty much every day for the last 13 weeks, often for 10 hours a day, not in air-conditioned rooms – very far from it – they just worked, and they worked brilliantly with Dante. This also wouldn’t have happened without Timeline. We worked very, very closely with them to achieve this.” 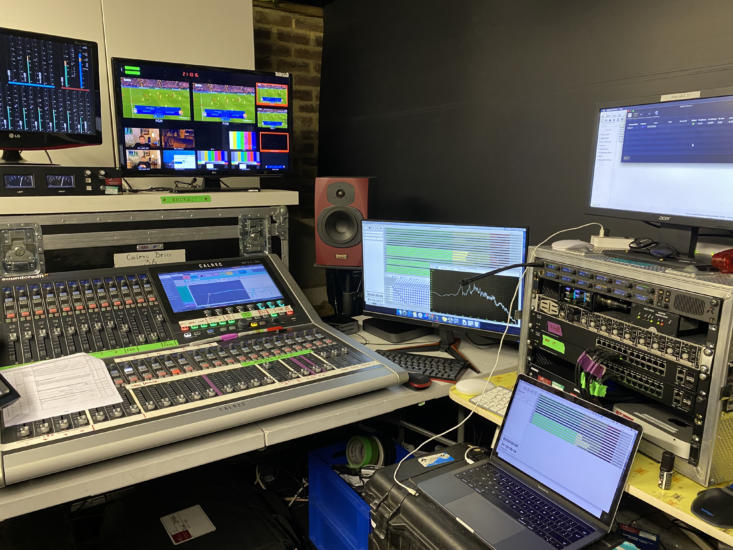 Tall Audio worked on BT Sport’s MotoGP show every Sunday for about 12 weeks. They did the Bundesliga, Premier League and Early Kickoff football show. They also handled a Champions League Show and the 1966 World Cup programme on C4.

Click on the links below:
The Choir, lockdown and the audio challenges
South Korea’s JTV installs Brio for radio programming
Russian HD  upgrade with Brio