Audio networking has brought great benefits to production workflows by significantly reducing cabling and setup times, providing flexible routing that can be managed en-masse at the touch of a button, and breaking the hard-ties between control rooms and studios. Some of these technologies, like Hydra2, offer very simple plug and play setup, but they require their own private network and specific switching hardware. Users want an open, shared network infrastructure, allowing them to freely connect devices to handy local switches that can pass all forms of media and data.

AES67 has been the talk of the town for several years now, and its ratification was a major milestone, consolidating numerous audio over IP networking technologies to their common denominators, allowing them to interoperate and connect with each other, and to pass over COTS switches. ST-2110 further confirms AES67 at the heart of broadcast as a part of elemental streaming, rather than having audio embedded into video
(and being less readily accessible).

This is a significant step forward, but what many don’t realise is that all AES67 defines is a common transport layer; there’s no discovery or control mechanisms baked in to AES67. That might sound a bit pedantic because AES3 is about transport, and has been a fundamentally important standard for many years, but that’s a point-to-point connection – you plug in a BNC and it passes audio.

In an IP world, users can access lots of audio, video and data from many devices, anywhere on the network, over a single connection.

Stepping back, traditionally, an audio operator’s job is to ensure that the right mix gets to wherever it needs to go to; in broadcast it’s as much about routing as it is about mixing, and it’s the operator’s responsibility to make sure that everybody is receiving the correct audio. The mindset in the IP world is a little different; it’s more about a peer-to-peer relationship, and connecting devices directly, without the need for the traditional I/O box and the multitude of formats they need to provide today. IP is about making a given media stream available to the world and allowing other people register their interest in that output and vice versa.

However, with discovery not defined under AES67, it’s not always easy to get a device to receive another manufacturer’s AES67 stream. Many manufacturers have adopted the style of discovery used by Ravenna, mDNS/Bonjour, but others have taken a different route, notably Dante-based AES67 streams advertise using SAP. A tool is available to connect – “Rav2Sap” – but this is a little clunky. Even with a common discovery protocol, to date, forming connections between AES67 devices involves engineers moving between web applications served by each device to configure their audio transmitters, and registering them to receive streams from other devices, often copying and pasting stream data between applications.

Whilst AES67 defines a common parameter set, the exact options available and even the terminology used varies between manufacturers. This is all a somewhat disjointed approach that requires a level of technical competence and IT networking know-how that we need to move beyond.

In the broadcast world, NMOS is hotly anticipated, aiming to standardise and enhance discovery and connection management, covering video as well as audio in a uniform way.

The first stage of its rollout, IS-04, is device discovery, along with some basic connection management. NMOS allows for IP media connections across a network to be managed from a central server, reducing the reliance on individual web-applications served from each device. We are starting to see IS-04 support in devices, and connection tools are becoming available, but few yet in active deployment.

We need to move towards plug and play, and a simple user interface that can manage connections and device settings in a consistent way across a whole network.

Calrec’s “Connect” application aims to do just that, by identifying media streams and devices on the network regardless of their registration/discovery protocol, whether it’s NMOS, mDNS, AES70, SAP or more specific Rest APIs.

Connect is able to present all of the devices on the network in a visual, familiar and user-friendly way that allows them to be easily inter-connected without getting bogged down in networking detail. Connect does provide elegant access to in-depth configuration, but it extracts the necessary information in a simplistic way to provide fast workflows for day to day management by production staff. 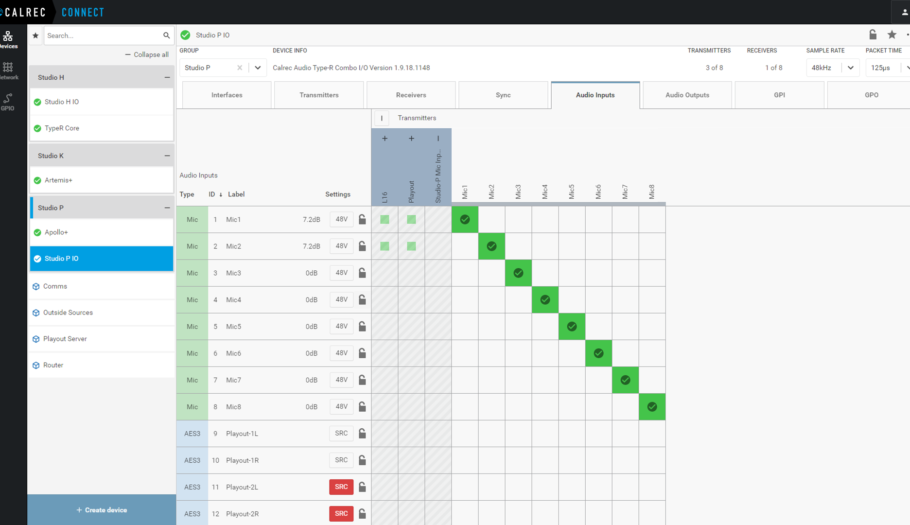 Redundancy is provided by allowing multiple servers to sit on a network, all synchronising their data. Each server can be accessed by multiple users, each with varying privilege levels. Devices can be given friendly labels and can be grouped by type or physical location. Access by each user can be limited on a stream by stream, device by device and group by group basis.

Users can search by stream, device or group name and can maintain their own favourites list. Stream connections across the network are visualised, and can quickly and easily be changed, saved and recalled en-masse. Devices can be locked, and even currently offline devices can be managed.

In addition to making, breaking and changing stream connections, Connect allows for configuration of streams across devices and provides network diagnostics such as bandwidth utilisation and dropped packets, along with warnings. Connect can even be used to create GPIO style logic connections between devices, and provides control for things like mic pre-amp gain and power.

Out of the box, when you buy one of our new native AoIP products – our new radio system Type R being a prime example – it has a Connect server running on its processing core. Any PC or tablet that can connect to the AoIP network can access the Connect server via a web-browser. Sensible factory default configuration means users can straight away see streams in and out of the mixer and its I/O boxes, and can simply connect them as needed, whilst user account management protects against unauthorised access.

Information about devices is maintained even when they are offline, so users can make and change connections that will be applied when they come back online.
Connect aims to provide a simple-yet-powerful tool for managing IP-based connectivity and providing familiar broadcast workflows across a wide range of devices, agnostic of manufacturer and specific protocol support.